Posted on February 2, 2021 by Austin Gisriel

Yet another most interesting item regarding outrage over the latest dance craze appeared in the “Out of the Past” feature in the February 1st edition of the Winchester Star. Datelined January 26, 1921 from Brussels, it reads:

Owing to a protest by the diplomatic corps, headed by Ambassador Whitock [sic], of the United States, the tango will not be danced at the coming court dances, the first to be held since 1914.

The “shimmy” is also barred, but the fox trot and one-step will be permitted.

It turns out that the Ambassador’s name was actually Whitlock, with an l. Brand—that was his first name—was a four-time mayor of Toledo, an attorney, a politician, a journalist, and an author, as well as the ambassador to Belgium, at least according to Wikipedia.

In other words, the man couldn’t hold a job.

He was appointed minister to Belgium in 1913, which was somewhat bad timing, but served U. S. interests splendidly during the Great War, and upon its conclusion, and the restoration of the Belgian government, the United States established an embassy in Belgium, naming Whitlock as the ambassador.

The Wikipedia article does not mention why Ambassador Whitlock took exception to the tango. We’ve already discussed polite society’s aversion to the shimmy in this blog post and this one, as well as this one. And one more here for good measure. Clearly, those who would maintain the moral standards of the day saw the jazz age dances as an affront to all that was holy and decent. The photo below, of Ambassador Whitlock and his wife suggests that their morals were affronted rather often. Constantly, perhaps. They certainly don’t appear to be a couple who would dip and dive in a tango, much less shimmy like flappers in a speakeasy. In fact, Mrs. Whitlock appears to have just read an item from an Indianapolis newspaper dated January 4th, 1921 which stated that the young women there refused to wear corsets to dances, because “they were termed ‘old ironsides’ by the boys and they were unable to accomplish the movements in the new dances.” Actually, Mrs. Whitlock appears to be wearing a corset at least two sizes too small. So does Mr. Whitlock, for that matter. 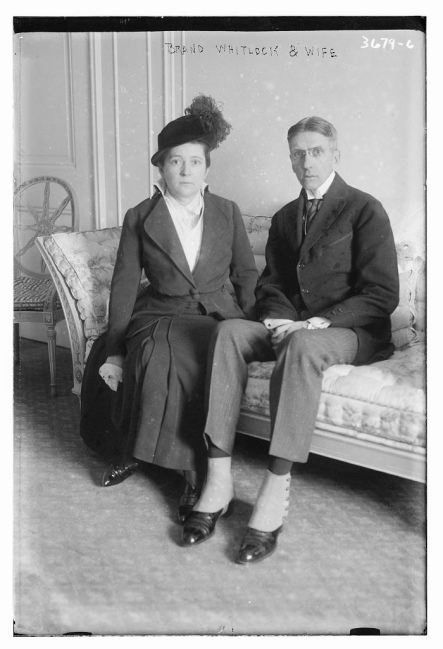 Fortunately for those of us in the dance community, Ambassador Whitlock has been forgotten while the tango and the shimmy live on. I intend no offense to Ambassador Whitlock by this remark. He was probably a laugh riot when he got together with the Minister of Sweden and they joked about the Ambassador from Luxembourg employing the wrong spoon for his soup at the dinner before the court dance.

So. In honor of all those diplomats’ daughters in Belgium who never got to tango or shimmy 100 years ago, and as a tribute to those girdleless girls from Indiana, I present another version of “I Wish I Could Shimmy Like My Sister Kate.

Enjoy. Enjoy it for them.

You know the guy that records a baseball game from the West Coast in July and doesn't watch it until January just to see baseball in the winter? That's me. I'm a writer always in search of a good story, baseball or otherwise.
View all posts by Austin Gisriel →
This entry was posted in Dance, Life is Interesting and tagged Belgian ambassador, Brand Whitlock, dirty dancing, I Wish I Could Shimmy Like My Sister Kate, shimmy dance, tango. Bookmark the permalink.