Happy Reunion on a Cold Night in Frederick

Our trip to Florida continues to bring joy almost a month after our return. An old friend, Don Hoover, became a regular follower of our trip and often commented in this blog about our adventures. Thanks to that interchange, we became determined to reconnect and did so last night, at a baseball game, naturally.

I hadn’t seen Don in some 30 years, but as soon as I came in sight of the Frederick Keys’ ticket booth, I recognized my old pal just by the way he was standing there. It is amazing how the mind’s eye retains its connections. 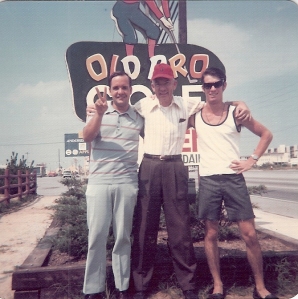 Don, my dad, and me at the Old Pro Miniature Golf Course in Ocean City, MD when we were much younger . . . and warmer.

We caught up on family and soon the memories started flowing. We laughed long and often, to the point that the other two hundred people in the stands must have wondered who the two lunatics were sitting behind the Keys’ dugout. The years fell away and not because we were traipsing down memory lane, but because we were laughing and talking as though there have been no intervening years.

As for the game, the Keys won a thrilling contest over the Winston-Salem Dash, 7-6. Perhaps I should say it was a chilling victory, because the only sound that greeted the final out was that of chattering teeth and scattered cries of “I can’t feel my feet!” as fans tried to get up and leave.

A chilly night indeed, but another warm memory to which Don and I have vowed to add to again.

You know the guy that records a baseball game from the West Coast in July and doesn't watch it until January just to see baseball in the winter? That's me. I'm a writer always in search of a good story, baseball or otherwise.
View all posts by Austin Gisriel →
This entry was posted in Life is Interesting, Uncategorized and tagged cold nights, Don Hoover, Frederick Keys, friends, friendship, Old Pro Miniature Golf, Winston-Salem Dash. Bookmark the permalink.

2 Responses to Happy Reunion on a Cold Night in Frederick