Al Has Street Named in His Honor!

My non-genetic twin and fellow baseball vagabond, Al Smith, has received a wonderful honor. It seems that the good folks of Berryville, VA have named the road that traverses the county park at the town’s entrance in his honor. I’m not sure if this is a tribute to his baseball career or his dedicated service to the Department of the Army from which Al retired this past January. Al’s not sure either as it was a surprise to him when I showed him the sign, but there can’t be any doubt that it is he for whom it is named. After all, a photo doesn’t lie: There’s Al and there’s the sign. 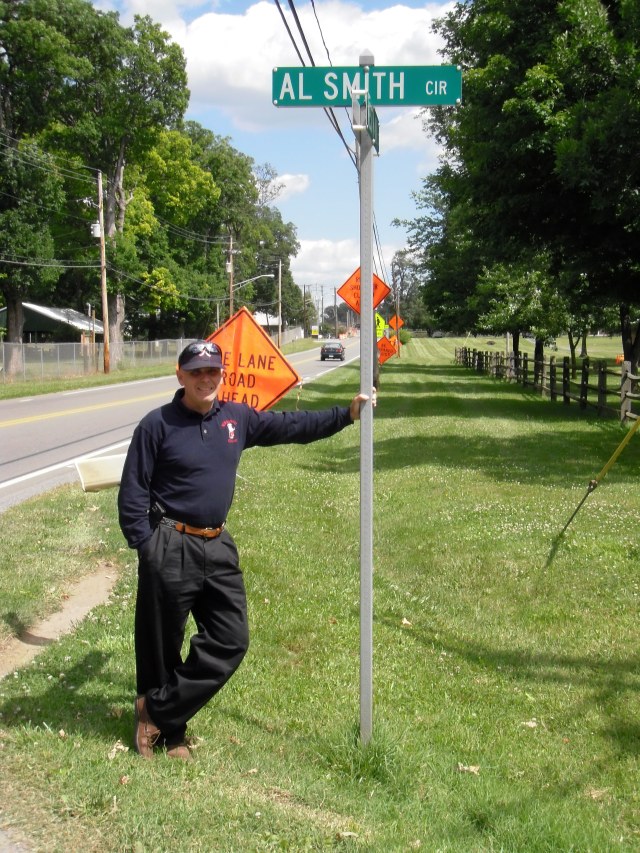 Al standing by the sign marking the circle named for him. Don’t know why he wasn’t invited to the unveiling.

You know the guy that records a baseball game from the West Coast in July and doesn't watch it until January just to see baseball in the winter? That's me. I'm a writer always in search of a good story, baseball or otherwise.
View all posts by Austin Gisriel →
This entry was posted in Life is Interesting, Uncategorized and tagged Al Smith, Al Smith Circle, Berryville VA. Bookmark the permalink.

2 Responses to Al Has Street Named in His Honor!