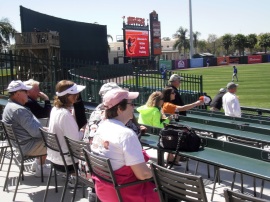 I have often said that baseball is a small world and this fact was illustrated again on our recent trip to Florida. We were seated in left field at Ed Smith Stadium in Sarasota enjoying the game, surrounded by a variety of fans from all over the country. A few were even from Florida. A contingent associated with the Puerto Rican World Baseball Classic team was seated several rows in front of us. About the 6th inning or so, one of these young men rose and made his way towards us. I wasn’t really watching him and was startled to hear, “Austin; do you remember me?” It was Richie Gonzalez, who was New Market’s second baseman in 2009 and is featured prominently in Safe at Home: A Season in the Valley. We exchanged pleasantries and am happy to report that Richie is now coaching in Puerto Rico. 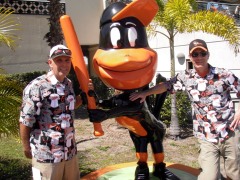 Along about the bottom of the 7th, a couple sat down next to us and the lady turned and said, “You guys did the video last year at Twin Lakes Park. We saw you earlier and recognized your shirts.” I’m not sure why she would have remembered us from our shirts–judge for yourselves from the photo–but she was referring to Episode Two of Off the Beaten Basepaths and we certainly remembered talking to her.

It was a fun trip all around and in addition to seeing the Orioles defeat Toronto 11-10 on a 3-2, 2 out, 3 run homer by Ryan Flaherty in the bottom of the 9th (an omen, I believe) we also saw the University of Florida defeat the University of Indiana in Gainesville, and the Phillies defeat the Astros (just as everyone else will this season) in Kissimmee. Another highlight, which was actually non-baseball related, was eating fried gator at Gator Joe’s Bar and Grille in Ocklawaha right on Lake Weir. Gator Joe’s is about 300 yards from the hide out where federal agents shot it out with the infamous Barker Gang in 1935.

The biggest highlight of the trip, of course, was spending a week with Al and Margo Smith in their beautiful new home in Stonecrest. Good thing they like company because they’re going to be seeing quite a bit of us in the future!

Considering that as I write this, the weather people are calling for up to a foot of snow starting tomorrow, you may want to venture to Florida in spirit by viewing the photo album of our trip.

You know the guy that records a baseball game from the West Coast in July and doesn't watch it until January just to see baseball in the winter? That's me. I'm a writer always in search of a good story, baseball or otherwise.
View all posts by Austin Gisriel →
This entry was posted in Baseball in General. Bookmark the permalink.

8 Responses to Familiar Faces in Florida