While it has been some time since my last Five Minute Fiction For Free offering, I have been busy writing. You see, the Society of American Baseball Research (SABR) has begun a massive project to collect a 2,000-4,000 biography of every player who ever played in the major leagues. As if that project weren’t big enough, SABR has also decided to amass game biographies, that is a 1,000-1,500 word essay on every game ever played. These are not simple recaps; the writer must incorporate what was historic or memorable about that particular game. The game may be memorable from the writer’s personal perspective, which led me to write about three games in particular. The first is “Thanks, Brooks” Day September 18, 1977 that was held to honor Brooks Robinson upon his retirement. The second was Brooksie’s Hall of Fame Celebration Night played on August 5, 1983. Martha and I attended these two games, and we listened on the radio to the third game played August 24, in which Tippy Martinez picked off three Blue Jays in the same inning. The first two games were personally memorable and the Tippy Martinez game was one of the craziest games every played. You can read the game accounts by clicking on the links to the right of the photos below: 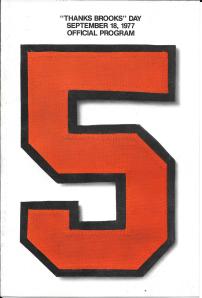 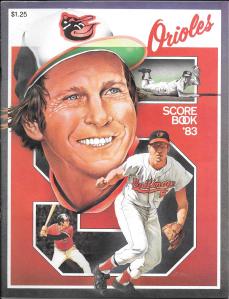 You know the guy that records a baseball game from the West Coast in July and doesn't watch it until January just to see baseball in the winter? That's me. I'm a writer always in search of a good story, baseball or otherwise.
View all posts by Austin Gisriel →
This entry was posted in Baseball in General and tagged "Thanks Brooks" Day, Baltimore Orioles, Brooks Robinson, Brooks Robinson Hall of Fame Celebration Night, game biography project, SABR, Tippy Martinez, Tippy picks off three Blue Jays, Toronto Blue Jays. Bookmark the permalink.