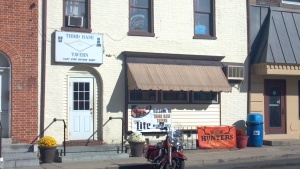 A big thank you to Ed Cave and the gang at the Third Base Tavern here in Williamsport for their wonderful hospitality this past Saturday. Ed asked me to do a Boots Poffenberger: Hurler, Hero, Hell-Raiser book signing at the tavern and it proved to be very successful. It also proved to be a great deal of fun and I hung around talking to folks for most of the afternoon.

Third Base was one of Boots’ favorite hang outs going back to the time when it was known as Ern’s Tavern. About the first person I met, “Big Bill” Suddueth, tended bar when Boots was a regular and we shared some stories about The Baron. Bill was actually seated in Boots’ favorite spot when I arrived, but soon Bill decided that “it was only right” that I sit there instead. Bill’s gracious gesture was an honor that I won’t soon forget. 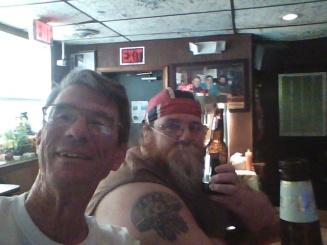 Big Bill and I raise a bottle to Boots.

Naturally, Bill and I discussed baseball, but we covered a multitude of subjects, from researching a book to the Common Core standards for education. Bill’s wife Cindi joined in the conversation as well.

Sarah and a couple of her friends stopped by to offer their support, which was very much appreciated. Once all the bikers left to continue their afternoon fund-raising ride, they actually had a place to sit down.

Unlike Boots, I did go home after a couple of beers (and drinking only a couple was very un-Boots like, but that’s a good thing in this case.) I was touched that staff and patrons alike expressed the hope that it wouldn’t be the last time that I slide in to Third Base. Thanks to the great folks I met there, it certainly won’t be.

You know the guy that records a baseball game from the West Coast in July and doesn't watch it until January just to see baseball in the winter? That's me. I'm a writer always in search of a good story, baseball or otherwise.
View all posts by Austin Gisriel →
This entry was posted in Boots' biography and tagged Boots Poffenberger, Boots Poffenberger: Hurler Hero Hell-Raiser, Ern's Tavern, Third Base Tavern, Williamsport MD. Bookmark the permalink.

8 Responses to Home at Third