A Lot of Miles and A Little Baseball

As is often the case whenever Al and I travel together, we manage to find great ballparks and delicious barbecue joints. The former we found in Cannonsburg, Kentucky as we were heading to lunch. The Luther E. Craig Baseball Complex is a beautiful Lion’s 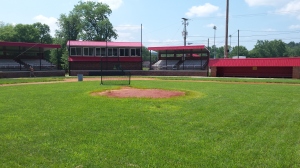 Club ballpark complete with enclosed press box, a covered grand stand, and a beautiful, level, soggy field. This last feature is a result of the tremendous rainfall that has covered this part of the country. Every river, run, and puddle that we crossed was high and muddy. In fact, at one point, a gentleman came over to the field and we feared that he was going to invite us to leave. Instead, he invited us to help push the lawn tractor out of a marshy spot over on the football field. We were happy to oblige.

We covered 480 miles today; 200 of which were across the country and 280 of which were simply up and down about 1,029 hills between Williamsport and Frankfort. Those 1,029 hills were populated by roughly 29 people. If a market for tree-filled mountains in the middle of nowhere ever develops, then West Virginia will be well on its way to being the richest state in the Union.

I’m not sure when the next post will appear, but it should be no later than Saturday afternoon. Keep following our trip on Twitter @austingisriel

You know the guy that records a baseball game from the West Coast in July and doesn't watch it until January just to see baseball in the winter? That's me. I'm a writer always in search of a good story, baseball or otherwise.
View all posts by Austin Gisriel →
This entry was posted in Baseball pilgrimages and tagged Cannonsburg KY, Frankfort KY, Luther E. Craig Baseball Complex, Staxx Barbecue. Bookmark the permalink.

3 Responses to A Lot of Miles and A Little Baseball