Wrapping Up the College World Series

Congratulations to Coastal Carolina on their 2016 College World Series (CWS) championship! The Chanticleers won an exciting 4-3 contest on Thursday afternoon making them 5-0 in elimination games for the Series. They are the first team to win the CWS in its very first appearance since Minnesota did it in 1956. 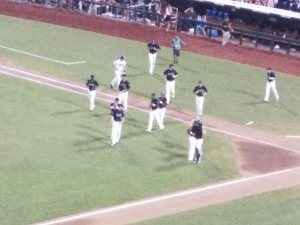 Coastal Carolina players run onto the field to celebrate their victory over TCU, which put them into the finals.

Coastal scored all four of its runs in the sixth inning when Arizona second baseman Cody Ramer committed two errors on one play allowing two runs to score. This was followed by a single and a mammoth home run by G. K. Young, making all four Chanticleer runs unearned. It is easy to pin Arizona’s loss on the Ramer error, but first year head coach Jay Johnson is far more to blame by inserting himself into Game 2, a 5-4 Coastal victory, when with none out and two on in the top of the first, he asked his third place hitter—you know, the guy who is supposed to be the best hitter in the lineup—to bunt including on the third strike. When this failed, Johnson put on a squeeze bunt with his cleanup hitter resulting in the runner on third getting picked off when the hitter bunted through the pitch and the runner could not get back to the bag in time. A subsequent single brought in one run, but Arizona should have had so much more.

This sequence of calls by Johnson represents a mind-numbing bit of strategic idiocy, but Johnson is not the only college coach who insists on putting on plays instead of letting his players simply play.

Florida’s head coach, Kevin O’Sullivan ruined the Gators’ chances of beating Texas Tech in the tournament’s sixth game when, down 3-0, he asked his second place hitter to bunt two runners over. The next batter, Peter Alonso, again the third place hitter and a guy who was hot, was promptly and properly walked intentionally. This set up the double play and that is exactly what happened next, as the Red Raiders turned a nifty 1-2-3 twin killing. Alonso, by the way, would hit a two-run homer in the ninth, but Florida succumbed, 3-2. 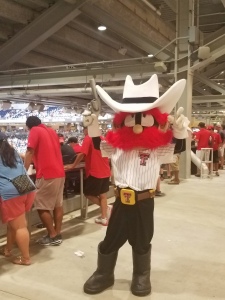 Al and I were rooting for Florida (so naturally they lost two in a row and were the second team to be eliminated, following in-state rival Miami), but if we weren’t we would have become instant Texas Tech Red Raider fans simply for the school’s wonderfully politically incorrect mascot who, dressed as a cowboy, waved around his mascot gun everywhere he went. Then, there was the Texas Tech “cheerleader” whom we passed on the way in after the Red Raiders were eliminated. God bless Texas.

As it was, we switched our allegiance to Coastal 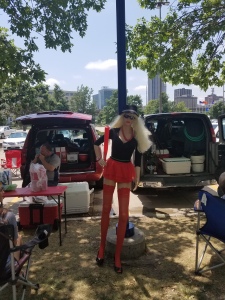 Carolina because of their underdog status and because their head coach, Gary Gilmore tended to not insert himself into the games. In a nice twist of fate, we saw the Chanticleers play in three of the six games we attended and also managed to attend one of their batting practice sessions at Bellevue East High School.

Actually the most interesting group of fans were from LSU, mainly because the Tigers weren’t even in the CWS. In fact, one LSU contingent had a serious tailgate party going on before every game that we attended, and we saw LSU gear everywhere.

So, what began in the snows of March has ended in the summer heat of Omaha with a team named for a rooster from The Canterbury Tales the NCAA Division I champs. You gotta love baseball, even when the coaches insist on employing a strategy that became pointless with the introduction of the live ball in 1920.

Coming soon! (i.e. as soon as I have time to produce it)—The College World Series edition of Off the Beaten Basepaths.

The sun has set on the 2016 College World Series.

You know the guy that records a baseball game from the West Coast in July and doesn't watch it until January just to see baseball in the winter? That's me. I'm a writer always in search of a good story, baseball or otherwise.
View all posts by Austin Gisriel →
This entry was posted in Baseball pilgrimages and tagged #donotbunt, #roadtoOmaha, Arizona Wildcats, Coastal Carolina Chanticleers, College World Series, Florida Gators, Gary Gilmore, Jay Johnson, Kevin O'Sullivan, NCAA Division I baseball champs, Omaha, Texas Tech Red Raiders, the greatest show on dirt. Bookmark the permalink.