The Ballplayers of WWII Did Their Part

Posted on December 5, 2016 by Austin Gisriel

All of you know of my passion for baseball and of my deep interest in World War II. Today—on this Day of Infamy—I thought all of you would find interesting the reaction of the ballplayers to this national crisis. 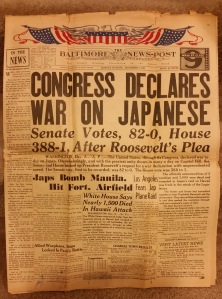 Future Hall of Famers Bob Feller and Hank Greenburg enlisted on December 9, 1941. Greenburg had been drafted, served in the Army, and had just been discharged earlier in the year. Feller enlisted in the Navy and insisted on serving in combat and not on an “entertainment squad.” In all, 35 future members of the Hall of Fame, including umpires, executives, and Negro League players served in the military, including, besides Feller and Greenburg, Ted Williams, Joe DiMaggio, Yogi Berra, Warren Spahn, Hoyt Wilhelm, and Jackie Robinson among others.

So many players left for the service that the number of minor leagues fell from 44 in 1940 to 12 by War’s end. It was this “man”-power shortage, of course, that led to the formation of the All-American Girls Professional Baseball League, featured in the film, A League of Their Own.

The lack of ballplayers became so acute that the both the young and the old were pressed into service. Joe Nuxhall pitched 2/3rds of an inning (giving up 5 runs) for the Cincinnati Reds in 1944—at the age of 15. He still holds the record for the youngest player ever to appear in a MLB game. Older players who were well past their prime were also called back to the big leagues. Pitcher Paul Schrieber, appeared in 10 games for the 1922-23 Brooklyn Robins, which was seemingly the end of his major league career. He was a coach and batting practice pitcher for the Yankees beginning in 1935, but in 1945, at age 42, he was activated, pitching in two games in relief. Schrieber holds the record for the longest stretch—22 years—between big league appearances.

Those players still playing contributed to the war effort in their own ways, particularly by raising money for War Bonds. One such effort, held June 26, 1944, has come to be known as the Tri-Corner Game. Almost 50,000 fans jammed the Polo Grounds to see the Yankees, Giants, and Dodgers play each other in a nine-inning, round robin contest. Each team batted six times with the Dodgers tallying five runs and the Yankees one while the Giants were shut out. Admission was the purchase of a war bond. Between program and outfield fence advertising, and admissions $4,400,000 was raised, the equivalent of $59 million in 2014 dollars.

500 former, current, or future major leaguers would serve in the military and almost 4,100 minor leaguers were part of the armed forces. To learn more about who these guys were, visit Baseball in Wartime, a magnificent website that features many of the professionals who served, as well as articles on service teams, service games, a timeline of baseball during the war, and several other interesting features. (It was created and is run by Englishman Gary Bedingfield, and has been expanded from its original focus on WW II to include ballplayers who served across all of America’s wars.)

It was a fearful time. Immediately after the Japanese attack on Pearl Harbor, the United States government issued .22 caliber rifles and ammunition to citizens so that they could take part in repelling an invasion which many expected. Submarine watch towers were built along the beaches of the Atlantic Coast, towers that still stood when I was a boy. It was a time when boys from a different generation put down their bats and balls and took up rifles and learned to fly bombers or in the case of my dad, became radiomen aboard destroyers patrolling the Pacific. Their female counterparts in the WAVES and WACS and factories—my mom sewed WAVE  blouses at Butler Brothers in Baltimore—put their dreams on hold, and together, they saved the world. We should be especially thankful today that they overcame both the national fear, and the personal fear they all felt, and made sure that their grandchildren have the unencumbered luxury of Life’s little joys, such as playing baseball.

You know the guy that records a baseball game from the West Coast in July and doesn't watch it until January just to see baseball in the winter? That's me. I'm a writer always in search of a good story, baseball or otherwise.
View all posts by Austin Gisriel →
This entry was posted in Baseball in General and tagged 75th Anniversary of Pearl Harbor, All-American Girls Professional Baseball League, Baseball in Wartime, baseball in WWII, baseball responds to Pearl Harbor, HOFers who served in WWII, Joe Nuxhall, Paul Schrieber, Tri-Corner game, USMC baseball. Bookmark the permalink.

8 Responses to The Ballplayers of WWII Did Their Part