Not Seeing the Forrest for the Trees

Posted on November 5, 2018 by Austin Gisriel

More than ever before in history—perhaps because platforms such as Facebook and Twitter make it so easy to do—we are reducing complex and nuanced situations to slogans and images. Upon reading or seeing such, we often say to ourselves, “That’s thought-provoking!” when in reality it is thought-suppressing, and merely provocative. The “truth” should not be predetermined by our already held belief, but by an examination of the facts. Even facts, however, can be tricky things, especially if we attend to some while ignoring others.

Rather than address a contemporary issue, it may be quite illustrative to examine the life of one Nathan Bedford Forrest as an example.

Here are three facts regarding Forrest:

These facts would clearly indicate that Forrest was a “bad guy,” but an examination of additional facts muddies that initial judgment.

Modern American sensibilities condemn all things Confederate because the Confederate States of America was established to protect slavery. Consider though that Forrest was the only soldier in either the Confederate or Union armies to enlist as a private and rise to the rank of Lt. General. No less an authority than Shelby Foote (in Ken Burn’s PBS series The Civil War) considered Forrest and Lincoln as the two geniuses produced by the war. Certainly he did his duty as he saw fit, for he enlisted when he was 40 years old, and could have easily avoided any military service.

According to Robert Selph Henry’s excellent biography of Forrest, First With the Most, even in the South the occupation of slave-trader bore “a certain social stain.” Yet, Forrest would not sell slaves to certain men because “‘they had the reputation of being cruel masters.’” Indeed, he impressed 45 of his own slaves to serve as teamsters in the Confederate Army, telling them that if the South lost, they would be free anyway, and if the South won, he would free them. Eighteen months before the end of the war, Forrest foresaw the outcome and manumitted them all so that they would have what he promised in the event that he was killed. 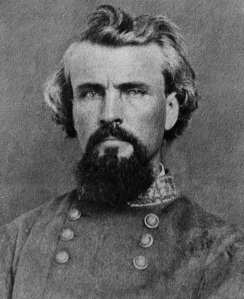 Perhaps, Forrest is most famous for founding the Ku Klux Klan. Except that he didn’t. He did end it though, or at least tried to. The Klan was founded by 6 original members who elected Forrest the first Grand Wizard in April of 1867. Conceived as a way to protect Southerners from the corruption of the carpetbaggers and scalawags (there was no Marshall Plan for the defeated South) the Klan quickly dissolved into gangs of thugs. By the end of 1867 or the beginning of 1868, according to Forrest’s day-long testimony before a Joint Select Committee of Congress[i], Forrest stated that he had the Klan, “broken up and disbanded. It was too late, however, and “dens,” as they were known, adopted the name and disguise, adopted the tactic of terror, and ignored the original purpose of the organization.

It is easy to condemn Forrest for fighting on the side of a society that approved slavery. As Mark Twain noted about growing up in a slave-holding society, however, “No one arraigned it in my hearing; the local papers said nothing against it; the local pulpit taught us that God approved it, that it was a holy thing, and that the doubter need only look in the Bible if he wished to settle his mind.” We can say that Nathan Bedford Forrest and all his friends and neighbors should have known better; they should have seen clearly right from wrong. Except that they were told that slavery was “right.” Can any of us say that we would have risen above such an environment, and reasoned out views contrary to our parents, grandparents, neighbors, and friends? Should Forrest’s military brilliance and sense of duty bring him a little credit?

And what should we make of the slave-trader who treated his slaves well, one might say even with respect?

If Forrest is condemned for his involvement with the Ku Klux Klan, should he be given some credit for trying to “suppress it,” to use his words?

The truth is often a nuanced, subtle thing that requires a great deal of analysis if we truly wish to arrive at it. Please remember this when you step into the voting booth tomorrow or when you form an opinion about a person, event, or subject. Keep in mind that we all succumb to the slogan, the image, and the 30-second advertisement, but then to be fair to ourselves, there are people paid large gobs of money to provoke us into substituting a Facebook meme for thinking.

Resist those people. Resist and reflect for the time has come to think, and think deeply rather than to react. But then, that time has never left.

[i] The testimony was given before the Committee in 1871 and appears in Volume 13 according to Selph. Forrest’s specific testimony runs some 40 pages for those interested.

You know the guy that records a baseball game from the West Coast in July and doesn't watch it until January just to see baseball in the winter? That's me. I'm a writer always in search of a good story, baseball or otherwise.
View all posts by Austin Gisriel →
This entry was posted in Life is Interesting and tagged getting at the truth of a matter, Nathan Bedford Forrest, political Facebook posts. Bookmark the permalink.

8 Responses to Not Seeing the Forrest for the Trees