I found a reference to my old friend and subject, Cletus Elwood “Boots” Poffenberger the other day while combing through microfilm of the Winchester Evening Star from September 1, 1944. A page two article headlined, “Park to play Wildcats Suday; Will Clash with White Sox Monday,” stated that “Boots Poffinberger (sic), former big league star now playing in a southern loop, may be with the ‘Wildcats’ Sunday according to Russell Potts, Park secretary. Williamsport is Boots’ home town.” The Winchester Park were a town team as were the Winchester White Sox. Every Williamsport team, including the present high school, have been nicknamed the Wildcats since, probably General Williams founded the town. 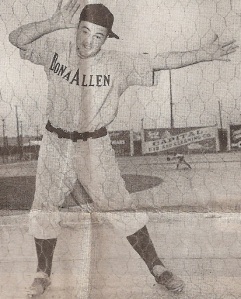 Did I mention that Boots was a real character?

The “southern loop”mentioned in the article is probably a reference to Boots’ time with the Nashville Vols of the Southern Association, which ended in 1941. Indeed, Boots was in a “southern loop” in a manner of speaking as he began pitching for the Parris Island Marine Corps team in 1943.

A September 5th article details the game, a Park victory, but neither the write-up nor the boxscore indicated that Boots was present, which a check of Boots Poffenberger: Hurler, Hero, Hell-Raiser (p160), explains. Boots had hoped to return to Williamsport in September, but his leave had been cancelled. Boots did get home the following month, and naturally, he played a ballgame then.

You never know what you’ll find digging through old newspapers and it’s always rewarding to come across something or someone you know well. It was nice to visit with my old friend, even if the visit was a brief one.

One question for my Winchester friends: Does anyone know where Winchester Park played its games?

You know the guy that records a baseball game from the West Coast in July and doesn't watch it until January just to see baseball in the winter? That's me. I'm a writer always in search of a good story, baseball or otherwise.
View all posts by Austin Gisriel →
This entry was posted in Boots' biography and tagged Boots Poffenberger, Boots Poffenberger: Hurler Hero Hell-Raiser, Parris Island baseball team, Russell Potts, Williamsport MD, Winchester Park baseball team. Bookmark the permalink.