As the summer of 1944 drew to a close, the expectation for Victory in Europe grew. After all, the Allies, who had stormed the Normandy beaches on June 6th, liberated Paris in a mere 80 days, accepting the surrender of the French Capital’s German garrison on August 25th. A remarkable example of home front expectations exists in the September 5, 1944 edition of the Winchester Evening Star in an article detailing Berryville, Virginia’s schedule for celebrating VE Day, which was clearly viewed as imminent. Berryville was, and remains a small town, resting a few miles west of the Blue Ridge Mountains, the Shenandoah Valley’s eastern border. Berryville went so far as to schedule, quite meticulously, what would happen in town, when “V-Day” arrived:

If the signal of the surrender of Germany is blown before 7 a.m. stores will not open.

If the signal is blown between 7 a.m. and noon, stores will close by noon.

If the signal is blown between 12 noon and 3 p.m. stores will close as soon as possible.

If the signal is blown after 3 p.m. any week day except Saturday, stores will close at 6 p.m. and remain closed the following day.

If the signal is blown after 3 p.m. on Saturday stores will remain open until their regular closing.

The headline in the next day’s edition of the Evening Star read, “Battle to Crush Germany Is About to Begin.” Berryville, Winchester, and the rest of the United States was eager to celebrate the “crushing.”

In fact, however, the Allies had moved so swiftly in pushing the German Army out of France that supply lines had become long, and supplies themselves were scarce. In addition, the hard-fighting, fast-moving troops were worn down. Many of these exhausted units were sent to the Ardennes in Belgium to recuperate, as were inexperienced troops who would undergo further training there because Allied command regarded this region as “quiet.” In fact, a great deal of activity was taking place on the German side of the Ardennes. A massive troop build-up was underway, one which, for a variety of reasons, Allied intelligence failed to detect.

At 5:30 a.m. on December 16th, the forest quiet gave way to a massive, 90-minute artillery barrage. The German offensive, code-named “Operation Watch on the Rhine” was underway, totally surprising the Allied command, and overrunning those green and exhausted American troops. We know this fighting as the “Battle of the Bulge,” a name that “was coined by contemporary press to describe the bulge in German front lines on wartime news maps,” according to Wikipedia, which features an excellent article on the entire campaign.

There was, of course, no mention of the fighting in the December 16th edition of the Evening Star, and no paper was published on Sunday, the 17th, but the headline on the 18th read, “First Army Strikes Back At Advancing Germans.” A sub-headline read, “Fierce Battle Is Expected To Become One of Most Decisive.” A sub-sub headline noted, “U. S. Positions Overrun.”

It wasn’t supposed to be this way. The war was supposed to be over by Christmas. Reading the succeeding days’ headlines, one can feel the uncertainty and anxiety of the contemporary readers:

Other grim details were reported, including the massacre at Malmedy, and that Germans had infiltrated American lines by wearing American uniforms. The Evening Star front page the day after Christmas noted in a sub-headline, “Foe Expands Belgium Bulge; Now Aiming Drive At Paris.” This was the first time bulge appears in any Evening Star headlines.

We know how this story ends, of course. Airborne troops, still in their summer fatigues, were moved into Bastogne, the key point in the American line. Their commander, General Anthony McAuliffe refused to surrender, issuing his famous reply of “Nuts,” to the German commander when asked to do so. The paratroopers held the all-important crossroads, the fog which had so aided the Germans, cleared, allowing superior American air-power to exert itself. General Patton broke through the German lines, relieved Bastogne, and by January 1st, the German offensive had stalled. By the end of the month, the German army was in retreat. 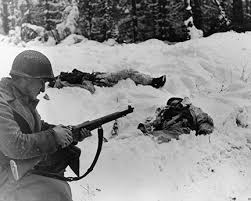 Fighting during the Battle of the Bulge was bitter and desperate.

Winning the Battle of the Bulge cost the American army 105,102 casualties, according to an official Army report.

While the Allies pursued the Germans through a bitterly cold February, American Marines were landing on the hot sands of Iwo Jima. When Victory in Europe was finally declared on May 8, 1945, America was still in the middle of the vicious fighting on Okinawa. VE celebrations broke out across the United States, but overshadowing the joy was the coming invasion of Japan, which American planners estimated would cost one million casualties. We know how that story ended, too.

It was not just the Battle of the Bulge that began 74 years ago yesterday. A two-week period of terrible uncertainty fell on the home front, and darkened the Christmas season almost as badly as Pearl Harbor had done three Christmases before.

The Holidays are always a good time to pause and reflect; we might want to reflect on what it was like during the Holidays in 1944 both in the snow-covered Ardennes and in Berryville, Virginia, where the potential for joy was replaced the reality of war.

You know the guy that records a baseball game from the West Coast in July and doesn't watch it until January just to see baseball in the winter? That's me. I'm a writer always in search of a good story, baseball or otherwise.
View all posts by Austin Gisriel →
This entry was posted in World War II and tagged Battle of the Bulge, Berryville VA, Christmas 1944, planning for VE Day, VE Day celebration, Winchester Evening Star, WW II. Bookmark the permalink.