The 75th Anniversary of the Allied invasion of Normandy–D-Day–will occur three weeks from today. D-Day was the turning point in the war in Europe; some have gone so far as to say that June 6, 1944 was the most crucial day of the 20th century. In any case, it is a day that we should remember or better yet, relive it.

We can relive it, at least as those back home lived it, glued to their radios, awaiting the next bit of news. The internet site, archive.org, has catalogued NBC radio’s programming from the first bulletin, broadcast around 3:30 a.m. on the East Coast, right through programs that night. The page features links to the music, interruptions, bulletins, comedies, and dramas that ran throughout the day.

You can access the entire page here. If you listen to the very first cut, you will hear an announcer interrupt music at about the 16 second mark to say that German radio had announced that “the Allied invasion had begun.” He begins to repeat himself, then pauses briefly, as if the significance of the moment has pierced his professional demeanor; then, he gathers himself and gives the message again.

Keep listening. You’ll hear talking in the background; the engineer and the program director cross-checking bulletins, perhaps. Soothing music returns, but it is doubtful that anyone was soothed that morning. 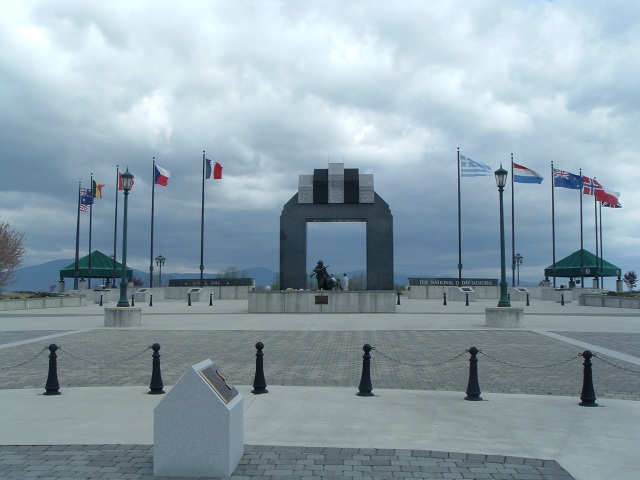 Listen to cut #3 at the 17:20 mark, when a summary of what was known is interrupted. A crackling silence ensues. The broadcast is thrown to “Supreme Headquarters, Allied Expeditionary Force.” Another static-filled silence, and then, General Eisenhower is introduced. He tells the “people of Western Europe” and by extension the folks back home that “a landing was made this morning on the coast of France.”

Later in the day, listeners were given a vivid and colorful description of the scene, which you can hear in clip #7.

It is good to know the facts of history; it is even better to know the feelings of those who lived it as it happened. Listen, and imagine. It’s a Tuesday morning. The sun isn’t even up yet. You’ve endured two and a half years of rationing and sacrifice, and now, the day you and your neighbors and the entire country has been working toward has arrived. At this point, you don’t know whether by sunset, the troops, our troops, will have been successful, or thrown back into the sea. All you can do is gather in front of the radio, and wait.

You know the guy that records a baseball game from the West Coast in July and doesn't watch it until January just to see baseball in the winter? That's me. I'm a writer always in search of a good story, baseball or otherwise.
View all posts by Austin Gisriel →
This entry was posted in World War II and tagged 75th anniversary of D-Day, archive.org, D-Day, Eisenhower's D-Day message, historic NBC radio broadcasts, June 6 1944, National D-Day Memorial. Bookmark the permalink.

2 Responses to D-Day: Remembered and Re-lived