One Can Only Imagine

The National D-Day Memorial and the town of Bedford are places that force the imagination to engage. This was especially true on Thursday, during the Commemoration of the 75th Anniversary of D-Day. The first plane to fly over was a German FW-190, fighter plane. It circled the crowd, slowly it seemed to me, and I wondered what it was like to be a British citizen seeing such a plane, wondering in turn if it was in its death spiral or if it was simply looking and would once more escort the Nazi bombers who were destroying London. To look up at the dogfights above, to wonder if the bombs had hit their targets—they surely hit something, and killed someone—must have been a helpless feeling indeed.

Later in the ceremony, which was punctuated by two brief and poignant speeches by Director of Veterans Affairs, Robert Wilkie, as well as Vice-President Mike Pence, a series of dignitaries read the words of 26 actual participants:

“The water was turning red from the blood.”

“Every man was a hero”

“I heard cries for help.”

I can only imagine. 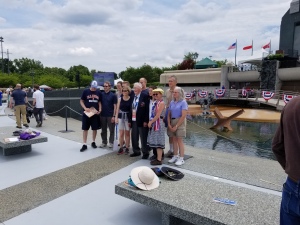 A veteran and his proud family

Before the final flyover, approximately 100 veterans were introduced to the crowd as their names and contributions to the war were read. Some were quite spry and walked with a steady gait, while others hobbled along or were wheeled past by a current member of the same military branch in which they had served. All were proud, and all must have been thinking where they were 75 years ago. I can only imagine their feelings on this day.

We ventured into the town itself on Friday, to a newly established “Tribute Center” specifically honoring the Bedford Boys. (More on this site later in the week.) It is housed in what was once Green’s Drugstore, which, like most drugstores in most small towns at the time, was the social center of the community. The displays and the building also command one’s imagination. Co-owner and tour guide, Ken Parker understands this. “The footprints of the Bedford Boys are all over Green’s Drugstore,” he remarked at the beginning of the tour. Indeed.

And there on a wall are the framed photographs of the 20 young men from the town who were all killed on June 6, 1944. They seemed to actually look back at those who have in essence, come to pay their respects, and shrug as if to say, “It was worth it.” Of course, that could just be my imagination. 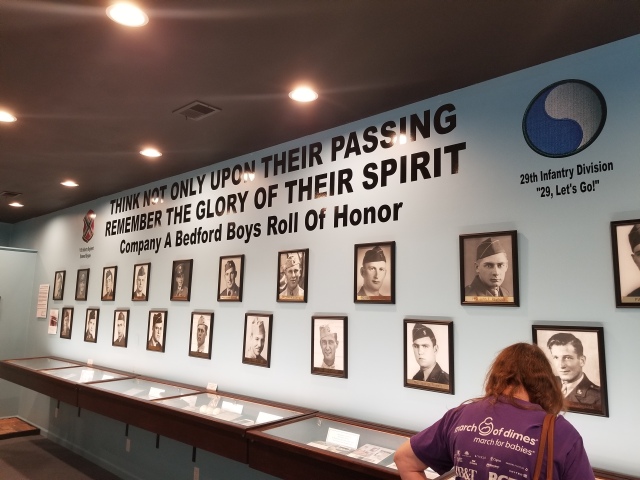 You know the guy that records a baseball game from the West Coast in July and doesn't watch it until January just to see baseball in the winter? That's me. I'm a writer always in search of a good story, baseball or otherwise.
View all posts by Austin Gisriel →
This entry was posted in World War II and tagged 75th anniversary of D-Day, Bedford boys, Bedford Boys Tribute Center, Bedford VA, Green's Drugstore, June 6 1944, National D-Day Memorial. Bookmark the permalink.