Last Friday, I received news that my baseball mentor and good friend, Mo Weber had died. Mo lived a good long life, having just turned 96 on June 24th of this year. I wrote about him in three different books, and I’m sure that he would laugh and say, “You better write about me now, too.”

I first met Mo over 15 years ago when he was a coach for the New Market Rebels of the Valley Baseball League. I interviewed him for the first time in November of 2008. We met for lunch and when we left, the restaurant staff was setting up for dinner. As it turned out, he became an entire chapter in Safe at Home: A Season in the Valley.

Mo always had a quip or a story, and it was often the same story, but that was one of the many characteristics that made Maynard G. Weber so lovable.

Mo was a character.

He taught me so much about the game that I love. Me, and about a million other people. We spoke the language of baseball, and one of my great pleasures in life has been sitting right behind home plate on some warm, lazy night in New Market with Mo, who is studying the action on the field the way an art critic might view a painting. That’s not surprising as his father was Max Weber, to whom the New York Times referred as “the dean of modern art in this country.”

Mo is silent as the pitcher comes set and sneaks a peek at the runner on first. The pitcher looks once, twice, then fires homeward as the runner takes off for second.

“Catcher has slow feet,” says Mo as the runner slides in safely. Classic Mo. (If the catcher doesn’t set his feet quickly, he can’t throw quickly enough to catch an average runner, must less a speedster, even if he has a strong arm. It is a compliment to think that Mo knows I’ll understand the meaning of his comment.)

Mo, himself, was as quick as they come. Quick with a laugh, quick to exhibit kindness, quick to take an interest in anyone who showed love for the game. 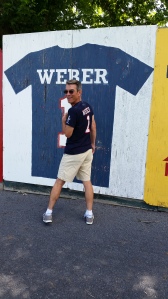 My friend is gone, but he is not lost as some people like to say. He contributed so much knowledge and joy and love to this world, and nothing in the Universe has more permanence than those elements.

I had the honor of writing the inscription for his plaque which hangs on the wall of the Rebel Park concession stand. It was placed there in 2015 when Mo’s Rebel uniform number, #1, was retired. I think it is a fitting epitaph: 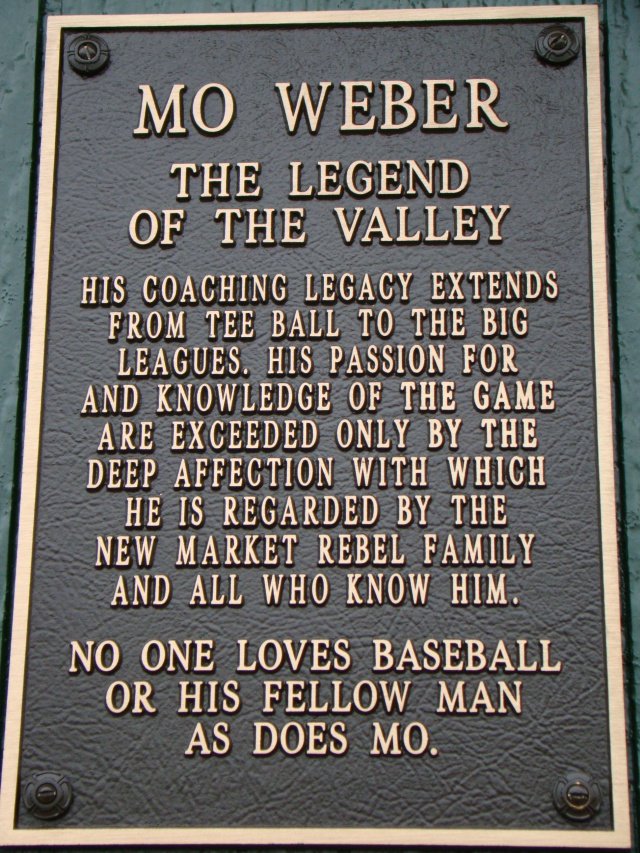 You know the guy that records a baseball game from the West Coast in July and doesn't watch it until January just to see baseball in the winter? That's me. I'm a writer always in search of a good story, baseball or otherwise.
View all posts by Austin Gisriel →
This entry was posted in Baseball in General, New Market Rebels and tagged Mo Weber, New Market Rebels, Valley Baseball League. Bookmark the permalink.