A Parade for the Home Folks

While yesterday’s ceremony at the National D-Day Memorial was for the nation, today’s parade through the streets of Bedford was for the town. It was small and sweet, just like the town itself. I heard someone remark that everyone in Bedford was there and I believe that to be true. I was standing at the main intersection where absolutely no one was directing traffic. No one had to because there was no traffic; indeed, all of Bedford seemed to be either in the parade or watching it go by.

Before the parade started, I could not fathom why a utility truck pulled up on Bridge Street as if to do some work. As it turned out, the crew backed down a side-street, ran the crane out over parade route and hoisted a giant American flag under which the participants could march. Both American and French flags flew from every lamppost. 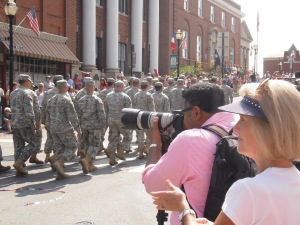 The current Company A of the 116th Infantry Regiment marched around the corner followed by reenactors portraying Company A from World War II–the Bedford Boys. Veterans rode in jeeps or cars, or in the case of a group from North Carolina in two motor coaches. When those busses went by, I took a quick picture and then simply held up in salute, my little flag that had been passed out to us spectators. 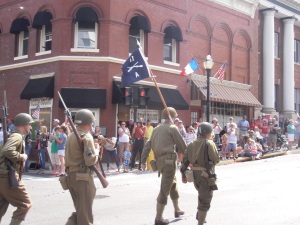 About 20 minutes after the parade finished, at 11:00 o’clock, the Presbyterian church rang its bell 19 times. A lone soldier played taps in front of the courthouse four times, once in each direction, and the courthouse bell was then struck 19 times, one for each Bedford Boy who was killed on June 6th. No one who had gathered at the courthouse required an explanation as to why the bell was struck or the significance of the number. After all, this parade was for Bedford and everyone in Bedford already knows.

The courthouse bell was struck 19 times in honor of the Bedford boys who died on D-Day.

You know the guy that records a baseball game from the West Coast in July and doesn't watch it until January just to see baseball in the winter? That's me. I'm a writer always in search of a good story, baseball or otherwise.
View all posts by Austin Gisriel →
This entry was posted in Uncategorized and tagged 116th Infantry Regiment, 70th Commemoration of D-Day, Bedford boys, Bedford D-Day parade, Bedford VA. Bookmark the permalink.

4 Responses to A Parade for the Home Folks