Mom and Me at Old Oriole Park (Indirectly)

I want everyone to know that I have been memorialized in what was once the ballpark in which my mom spent a great deal of time when she was a girl. Well, mentioned is perhaps a better word than memorialized, but let’s not quibble. I didn’t even know about it until a friend of mine, Allyn Gibson, brought it to my attention in an e-mail:

I ran into you yesterday—well, your name, anyway—in an unexpected, but in retrospect not surprising, place.

I was at Peabody Heights Brewing in Baltimore, the brewery built on the site of the Oriole Park used by the Baltimore Terrapins of the Federal League and the Baltimore Orioles of the International League from 1914 to 1944.  Besides the small baseball museum they have about the ballpark, they also had some baseball artwork — a Field of Dreams poster, as well as a poster of the cover to David Stinson’s Deadball.  Next to the Deadball poster was the sign that I attached, and down there, at the very bottom, is your name.  So there you are, memorialized in what was the left field corner of old Oriole Park. 🙂 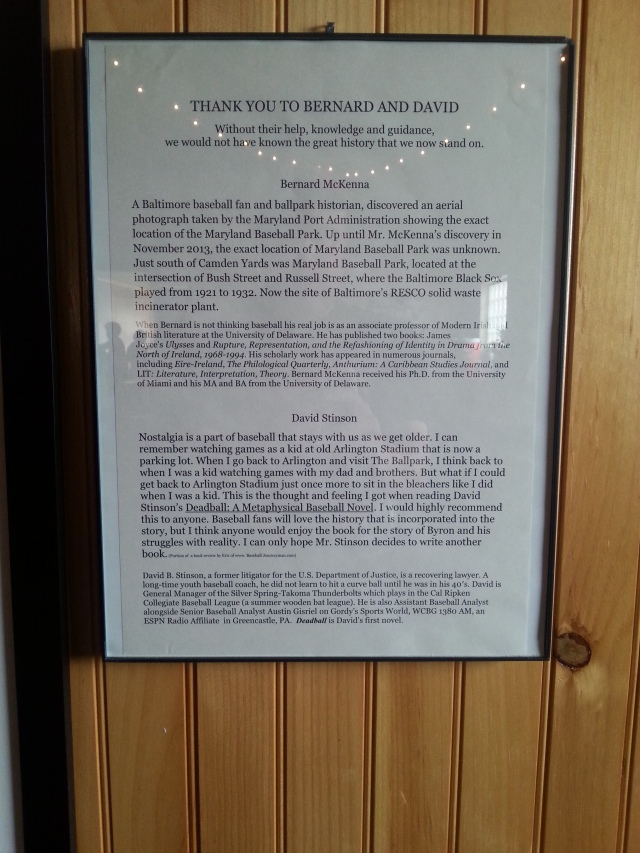 Look carefully; on the next to last line at the very bottom.

The world is full of connections if we but look for them.

I have to thank my buddy David Stinson for including my name in his bio, as well as the sharp-sighted Allyn for sharing this.

You know the guy that records a baseball game from the West Coast in July and doesn't watch it until January just to see baseball in the winter? That's me. I'm a writer always in search of a good story, baseball or otherwise.
View all posts by Austin Gisriel →
This entry was posted in Baseball in General, Life is Interesting and tagged David B. Stinson, Deadball: A Metaphysical Baseball Novel, old Oriole Park, Peabody Heights Brewing. Bookmark the permalink.

6 Responses to Mom and Me at Old Oriole Park (Indirectly)