As you know, the Valencia Ballroom appears on the cover of Swing Time and plays a prominent role in the story. It occurred to me recently to search for old photos of the place, and sure enough, there were several postcards listed on e-Bay illustrating what it looked like back in the day. I posted the eBay listing to Shenandoah Valley Dancers, our local dance community’s Facebook page and by the next day, someone had bought the postcard. I mentioned this to my friend Shea, and added that I hoped it was someone in our group who got it. 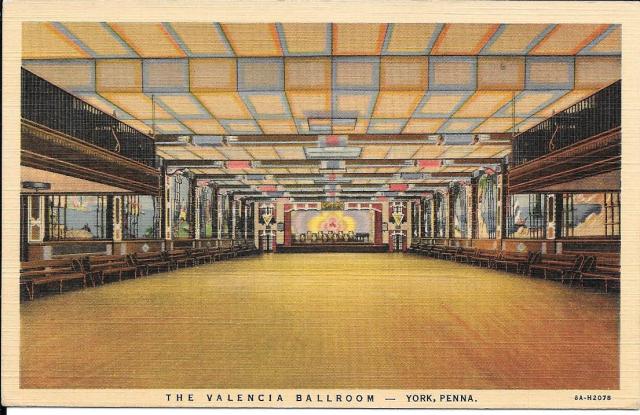 A much more colorful Valencia, probably from the 1940s.

Turns out that Shea bought it as a gift for me, and it came with a surprise. When we turned the postcard there was the autograph of famed jazz and big band drummer Buddy Rich, along with the autographs of Johnny Angelo and Lynn Warren. Those two names I did not know, but it seemed to me that these “other two” must have been part of whatever band Rich was playing in at the Valencia on a particular night. I couldn’t find any reference to either on the Internet; therefore, I turned to Craig Orndorff, a friend of mine, who produces a wonderful syndicated radio program, Seems Like Old Times. A local boy from Woodstock, VA, Craig is something of an expert on the old bands, as you’ll discover if you listen to his program. (And you should! Here’s the link to his website.) He was able to tell me that Johnny Angelo was a tenor sax player, and that Lynn Warren was a vocalist with the Ray McKinley Orchestra. Further research turned up this recording of Warren singing “Somewhere Over the Rainbow” from 1947 with that orchestra. Interestingly enough, McKinley was a drummer for Glenn Miller before starting his own band, and is someone whom Buddy Rich cited as influencing him. 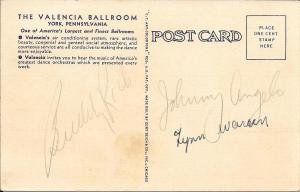 Of course, I wonder about the night or nights these autographs were obtained. In my mind’s eye, I see a happy dancer, maybe with his girl on his arm, approaching these three who are hanging out at the side of the stage during a band break. They sign his card and he—or more likely she—tucks away this souvenir of a special night in a shoe box where she kept special things. One night followed this night, which was followed by another and another until it had been years since that night at the Valencia. When the kids or grandkids found the post card, they could not know of the special night; probably never even heard of Buddy Rich. (Clearly, the eBay seller hadn’t!)

I know there was a special night at the Valencia, though, because that card still vibrates with the joy of that evening. There have been thousands of such moments there, and imagining such moments is what inspired Swing Time in the first place.

The Valencia post card illustrates two points: First, joy is like energy—it cannot be destroyed, and second, I am very fortunate to have the many friends that I do. They are the fortune that I have accumulated in a lifetime of special moments. . . . Oh, I guess there is one more point. Always turn over old postcards. You never know what may be on the back!

You know the guy that records a baseball game from the West Coast in July and doesn't watch it until January just to see baseball in the winter? That's me. I'm a writer always in search of a good story, baseball or otherwise.
View all posts by Austin Gisriel →
This entry was posted in Dance, Writing and tagged Buddy Rich, Johnny Angelo, Lynn Warren, Ray McKinley Orchestra, Swing Time, The Valencia Ballroom. Bookmark the permalink.